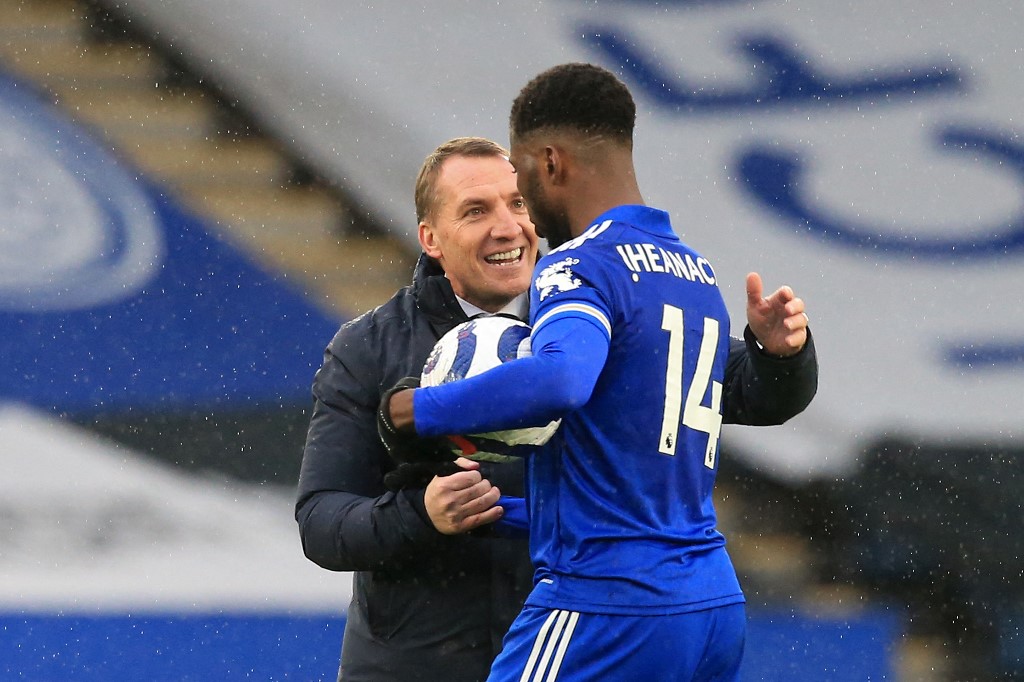 Leicester City’s Northern Irish manager Brendan Rodgers (L) congratulates Leicester City’s Nigerian striker Kelechi Iheanacho (L) at the end of the game during the English Premier League football match between Leicester City and Sheffield United at King Power Stadium in Leicester, central England on March 14, 2021. (Photo by Lindsey Parnaby / POOL / AFP)
Former Tottenham Hotspur manager Tim Sherwood is of the opinion that Kelechi Iheanacho is now an important member of the Leicester City squad and Brendan Rodgers cannot afford to drop him from the starting lineup. For a while in his Leicester City career, it looked like Iheanacho won’t fulfill his talent or just be no more than a super sub, but he’s the player that has made the biggest impact for Leicester City in the last two months. Since the start of March, the Nigeria international has directly participated in a remarkable 15 goals in ten matches across all competitions for the Foxes, all of which he started, which is a testament to the player and the coaching that he has received. ALSO READ: EUROPA LEAGUE: ‘Can’t wait to be back’ — Chukwueze eyes United final “It has been forced upon him (Brendan Rodgers) a little bit, there was no Maddison, there was no Ayoze Perez,” Sherwood said on Premier League Productions. “He played him (Iheanacho) when Vardy was injured but he stuck with the two because you cannot drop him at the moment. ALSO READ: SEGUN ODEGBAMI: Sports ministry versus sports federations – war after the Olympics? “He is undroppable, fantastic goals that he scores. I feel sorry for him, he has come from Manchester City, he probably thought he was going to play every minute of every game, didn’t materialize like that. “Now he has kept himself right, he’s very professional, he’s had the opportunity and he’s showing everyone what he can do.” For the second month running, Iheanacho has been double-nominated for the Premier League Player of the Month and Goal of the Month awards. Vanguard News Nigeria The post Iheanacho is undroppable – Sherwood appeared first on Vanguard News.
Top
Post Reply
1 post • Page 1 of 1